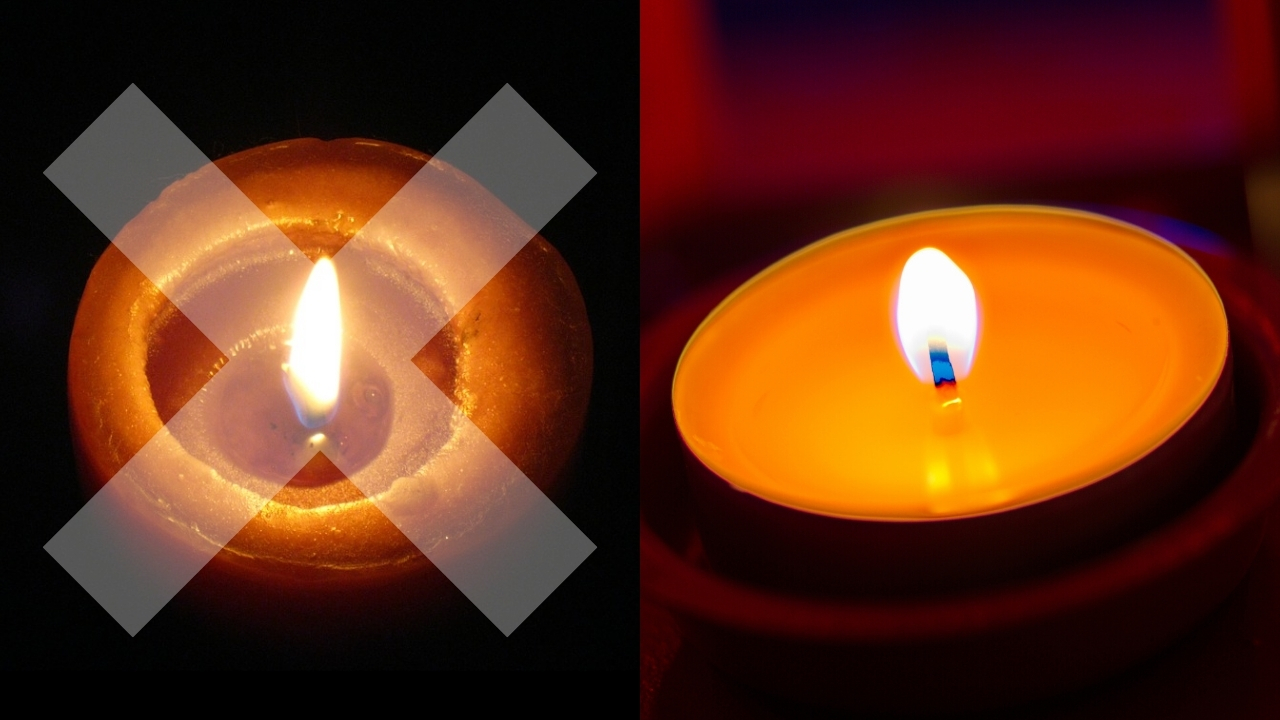 Even if you haven’t heard of the term “candle tunneling,” there's a good chance you’ve experienced it before at some point. Candle tunneling is a common but preventable problem that occurs if you’re not careful when burning a candle.

In this article, we’ll help you understand what candle tunneling means, how to fix it, and how to prevent it in the future.

What Does “Candle Tunneling” Mean?

Tunneling happens when only a small portion of the wax around the wick melts while the candle is burning.

Instead of having the entire surface of the wax melt evenly, it will appear as though the flame is burrowing into the candle and creating what resembles a small, vertical tunnel — hence the name.

Inside the tunnel, the wax directly underneath the flame quickly melts into liquid while the surrounding wax remains hard. This causes the tunneling to become worse over time.

Once the wick descends deeper into the surrounding wax, the flame won’t be able to get enough oxygen to sustain itself, causing the candle to go out.

But the problem doesn’t stop there. Tunneling is bad because it can drastically reduce the total burn time of your candle.

Normally, burn time is based on the total volume of wax in the container — in general, bigger candles have longer burn times. But when candle tunneling happens, only a fraction of the wax is actually used up before the wick reaches the bottom.

As a consequence, all of the remaining wax — and the luxurious fragrances contained within — that makes up the hard, outer ring surrounding the tunnel is sadly wasted. 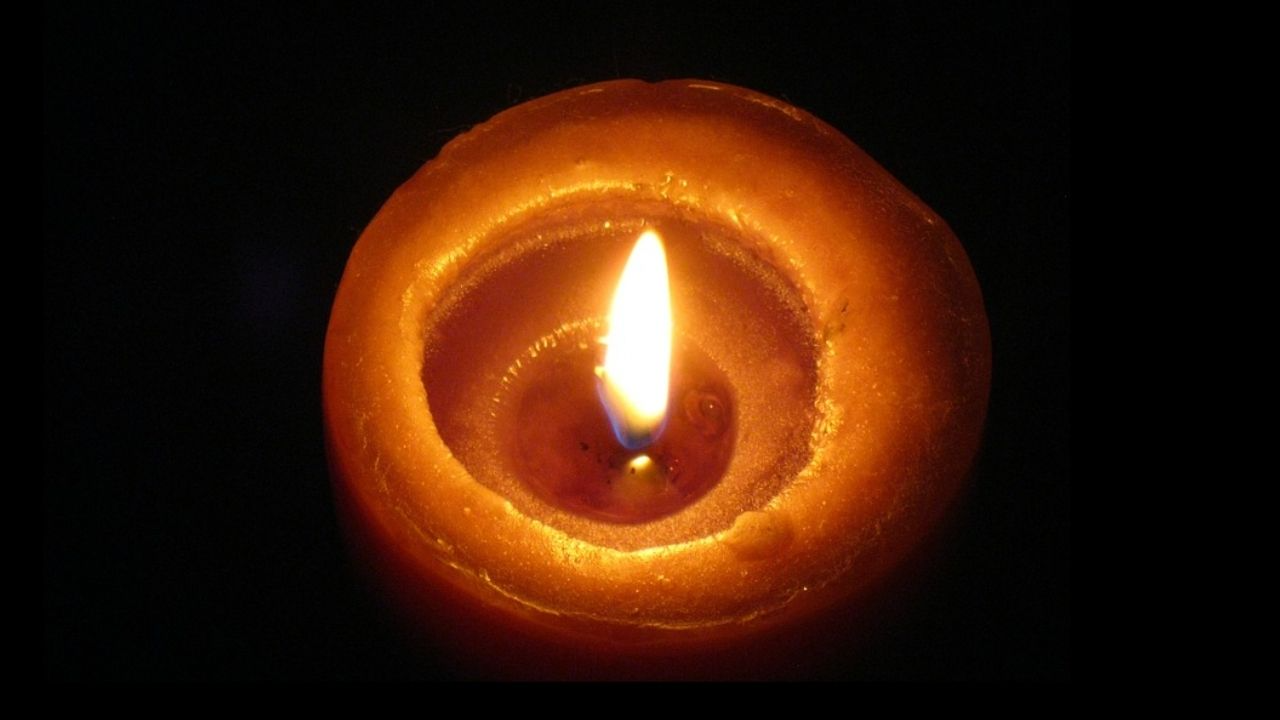 Why Does Tunneling Happen?

People sometimes mistake tunneling as an issue of candle quality.

It’s true that tunneling is more likely to occur in cheap candles compared to higher quality luxury candles. However, the truth is that tunneling can happen to ANY candle — even the most expensive ones.

There are two main causes of candle tunneling:

In this context, poor candle burning habits refers specifically to the "first burn," or the first time you burn the candle.

At the Harlem Candle Company, we always emphasize how important it is to burn the candle long enough to let the entire surface of the candle melt before blowing or snuffing it out. This usually takes at least an hour or two, depending on the size of the candle.

If you don’t do this, you’re almost guaranteed to get tunneling

Why? That’s because wax contains a certain amount of “memory.”

Wax isn’t always as “hard” as it seems. Even in its solid, unmelted state, wax will continue to harden over time. Candle wax that was melted and cooled again yesterday will always be softer than candle wax that has been sitting around for a week.

So If, on the first time, you only let the wax in the center melt before blowing the candle out, on the second time you burn it, only that small center portion of wax will continue to melt. That’s because it’s “softer” than the wax around it and therefore requires less thermal energy to melt again. The surrounding wax that didn’t melt the first time is “harder” in comparison, so it won’t melt and voila — you have tunneling.

The other cause of candle tunneling is when the wick is too small for the size of the candle.

If the wick is too small, it might not be able to generate enough heat to melt the wax all the way at the edge of the candle. As a result, even if you give your candle plenty of time on the first burn, you may still end up getting tunneling.

This is a problem with the design of the candle, which is why tunneling is more common in the mass-produced candles that use cheaper wicks. The more expensive, luxury candles are usually designed with more care, making sure that the wicks are of higher quality and properly sized to the diameter of the candle.

But again, tunneling can still happen in even high end candles if you don’t burn them properly. Make sure you allow enough time on the first burn to melt the entire surface evenly.

How To Fix Candle Tunneling

What should you do if your candle has already started tunneling?

Conceptually speaking, in order to fix candle tunneling, all you need to do is melt the outer wax surrounding the tunnel and make the surface even again.

If the tunneling is severe (i.e. the sinkhole is 1-2 inches deep), it may be difficult to salvage. You might need to spend a lot of time to melt down and remove the extra wax.

But if the sinkhole is still pretty shallow (ideally 1/2 inch or less), you can fix the tunneling without too much trouble.

We recommend 2 ways to do this:

For this method, we use an external heat source (a heat gun is ideal, but a hair dryer can also work) to melt the harden wax around the edges of the container. This "resets the memory" of the wax, so to speak, widening the melt pool that reaches all the way to the edges.

For your safety, especially if you're doing this for the first time, make sure you're wearing eye protection and clothes that can be washed if a bit of wax gets on it. And lay some old newspaper beneath the candle to protect your table or floor.

Lastly, when using your hair dryer, don't turn it on directly over the candle — hold it far away and slowly move it closer to an appropriate distance where it won't be blowing melted wax all over the place.

Rather than using an external heat source, this method traps and reflects the candle's own heat to achieve the same effect of melting the extra wax and smoothing over the top layer.

Like with the method above, please put safety first whenever you're dealing with lit candles and hot wax. The candle container WILL get very hot.

*Note: If your flame goes out put the foil on, that means the opening you cut in step 3 might be too small for your candle. Widen the hole a little bit and try again until your flame stays lit.

How To Prevent Tunneling When Burning Your Candles

The best way to fix candle tunneling is to prevent it from happening in the first place. And it’s very simple, too.

To prevent tunneling, all you need to do is burn your candle long enough each time so that the entire top surface of wax is melted. This is especially important the first time you burn your candle!

How long that takes depends mostly on the size of the candle. A good rule of thumb to remember is that you should burn your candle for one hour per every inch of its diameter. So if your candle has a diameter of 3 inches, you should plan to let it burn for 3 hours before putting it out.

And that's it! We hope this guide to fixing and preventing candle tunneling will help you enjoy candles that last longer and burn more beautifully.

What Makes a Candle a “Luxury Candle”?